The Zen of Chainmail

In a peripheral conversation I'd been having with some fellows on social media, a few ancient-school enthusiasts (that is, people who enjoy OD&D and and the LBB+Chainmail configuration), a newly baptized member expressed some confusion on the three modes of combat presented in Chainmail. That conversation being particularly edifying, I was asked to share it publicly as a resource for new ancient-schoolers going forward. 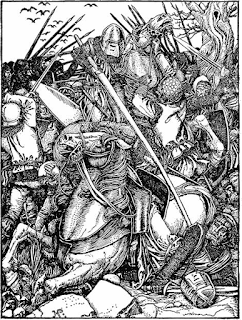 Presented here, a cleaned up and annotated version of that conversation. I hope, readers involved in the conversation I reference, that it accurately reproduce the value you saw in it!

One key element to understand when looking at Chainmail combat - and something to help explain why Dungeons & Dragons moved away from Chainmail as rapidly in its history as it did compared to the Alternative Combat System - is the fact that Chainmail, at its core, is not a role-playing or fantasy adventure game: it's designed and was played as a table-top wargame.

In a fantasy adventure game, the focal point is on the adventuring party: not necessarily on the player characters, but on the player group, how it interacts with the dungeon or wilderness environment, and what story then emerges from those interactions. Combat is only one facet of the experience and is thus abstracted, reflecting as such.

In a wargame, the focal point of the game is the clash of armies. You can have - and I historically enjoy playing in - hex and chit over-maps to help guide your engagements: but the hobby extends primarily into the experience of the battles, themselves, and to events and tournaments of those battles.

Knowing that, it becomes important to be able to constrain battles into a set time box. RPG combat is more dramatic - characters take several hits before going down, their special abilities do special things to change the dynamic of how they interact with the world. Wargame combat - and thus Chainmail combat - is far more lethal, far more quick: by design, it is less about the drama, less about the ebb and flow of individual duels, and more about quick resolution, allowing the turn to move on and empowering the players to focus on the drama, ebb, and flow the larger battle.

Standard combat in Chainmail - commonly called the Mass Combat system - is the core of the game. It represents a high-level interaction between grunts: front line, no-name soldiers. Using Mass Combat in a D&D game is most appropriate when encountering enemies in the wilderness: the 300 end of those 30 to 300 Orcs appearing. Hirelings and mercenaries clash with the enemy and the situation resolves quickly in a few rolls. 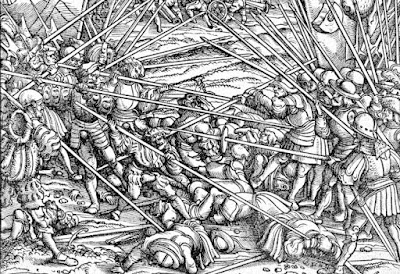 Notably, Chainmail is a historical battle game. Fantastic elements were included in the back as a supplement. Thus, looking for an analogy - recreating the Battle of Vienna might be a good use case for Chainmail. From a literary perspective, however - consider the Robert E. Howard story The Hour of the Dragon: a tale including several full-scale, sword-and-sandal military engagements. If Conan is the player character in this story, then the engagements represent Domain tier play: and Chainmail serves well to represent what happens in "play" of the narrative - be it either the role troop morale plays in the defeat Aquilonia suffers against the Nemedians or, later, the role troop type plays in defeating Tarascus, Amalric, and their allies in the engagement following Xaltotun's defeat.

Man to Man combat - originally, per the Chainmail booklet, devised as part of the siege warfare rules - is supplemental to the main game and is representative of a low-level, more granular interaction between special characters. Squad leaders squaring off within a ring of their men; two warriors meeting in honorable combat or a duel. It takes much more processing and time to run at the table - intentionally so: because it isn't intended to be the default. It is intended to be special, to come up infrequently at the table: it puts more on the table in terms of rules and involvement because more will be at stake in terms of how significant the loss of participants in the Man to Man will be. 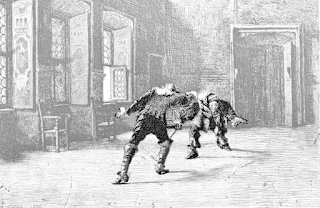 Man to Man is far closer to the combat rules to which players of modern fantasy adventure games are accustomed and is far more involved than Mass Combat - which leads many to consider it as the default when using Chainmail to resolve D&D combats.

To refer to Game of Thrones, recall the culmination of the rebellion against the Mad King - the Battle of the Trident - wherein Robert Baratheon is said to confront Rhaegar Targaryen. They are equals in most respects - two leaders, two noble warriors, clashing on the field of battle:

"The two knights fought valiantly upon their destriers, according to all accounts"

Where the latter, Rhaegar, wields a sword - the former on the other hand, Robert, bears the great spiked warhammer of Storm's End. Both of them clad in plate, Robert would need an 8 on 2d6 to hit Rhaegar ("spiked hammer" does not appear on the Man to Man table, but treating the hammer as "morning star", presuming Robert fighting with two hands or treating it as a "mace," allowing Robert to have a shield both result in the same hit probability) where Rhaegar - armed with a sword and shield - would need a 10 to hit Robert - an 11 if Robert was using a shield! Using Chainmail Man to Man to resolve the encounter - Rhaegar has between an 8% and 16% chance to score a hit - depending on whether Robert bears a shield: while Robert has a chance just in excess of 41% to score a hit on Rhaegar - it falls into place, based on the numbers, that presuming all else equal, the outcome - statistically - was in very little question.

Lastly, Fantasy Combat. Fantasy Combat is frequently the cause of confusion for referees attempting to put Chainmail into an OD&D game because of how dramatically different it is from the other two combat modes - and it is irrevocably tied to OD&D because of the fantastic elements intrinsic to the fantasy adventure genre.

Why is Fantasy Combat so different? Because - unlike Mass and Man to Man combat - Fantasy Combat is intended expressly to represent a literary or a narrative encounter rather than to emulate verisimilitudinous or historical recreations. 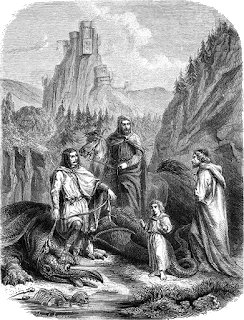 So, like the Battle of the Five Armies? Actually - no. The Fantasy Supplement which introduces Fantasy Combat does contain rules for Eagles, Men, Orcs, etc. - but it those entries utilize are statted to use the Mass Combat rules when engaging each other on the field. Fantasy Combat, or the 2d6-immediate-resolution rules similar to Man to Man but not considering equipment or armament - is instead aimed at the confrontation between the epic hero and the supernatural, fantastic enemy.

Fantasy Combat is the showdown at the Bridge of Khazad Dum between Gandalf and the Balrog (Wizard vs. Balrog); Fantasy Combat is the moment that the Witch King of Angmar lands to confront Eowyn, the White Lady of Rohan, as she rides with Merry. (Wraith vs. Hero (Super-Hero?)) Fantasy Combat is not intended to provide mechanisms to make a situation exciting, an encounter dramatic or tense: Fantasy Combat, in line with the intent of the Chainmail wargame, was intended to provide a fast and simple resolution for what would be, in a film or book or in a home RPG session, an extended scene. It is an opportunity, Daniel Norton of Bandit's Keep argues, to introduce those dramatic or tense narrative elements with creative license: however it does so with the perfunctory brevity appropriate to a tabletop miniatures experience. To retain the Lord of the Rings analogy, the encounter at the Bridge of Khazad Dum might be represented by a single round of combat in which the Balrog rolled an 8 and Gandalf (a Wizard) rolled a 10: the Balrog would be defeated and Gandalf would be "pushed back," over the edge of the chasm.

But it doesn't matter what weapon I'm using? There is some weapon consideration - such as the Hero and Super Hero taking down a Dragon with an arrow - but the primacy of the Fantastic Combat is to tell the story of the combatants, not their equipment. Recall Three Hearts and Three Lions:

The troll's smashed head seethed and knit together. He clambered back on his feet and grinned at them. [...] Holger and Carahue rolled a thing as heavy as the world toward the furnace heart of the cave, while it fought them with snakes of guts. Afterward he could not remember clearly what had happened. But they burned it.

The purpose of the encounter in the story being to showcase the heroes and the monster, not to explore the specific mechanisms by which its metabolism can be overcome (something D&D would later fail to do in their Troll rules) - so also, under the Chainmail rules - so also does Fantasy Combat focus on the combatants' essence rather than their kit, footing, movement rates, etc. The rules don't dictate if the weapon being used is effective or not - or what mechanism, strictly by the roll, is employed to win the day: instead, its a higher level abstraction wherein the strength and cunning of the miniature are assumed and the literary tradition of their archetype is weighed in order to determine an outcome.

And Them's My Two Coppers

Public domain art retrieved from OldBookIllustrations.com or the National Gallery of Art and adapted for thematic use. Attributions in alt text.

Email ThisBlogThis!Share to TwitterShare to FacebookShare to Pinterest
Labels: ramblings 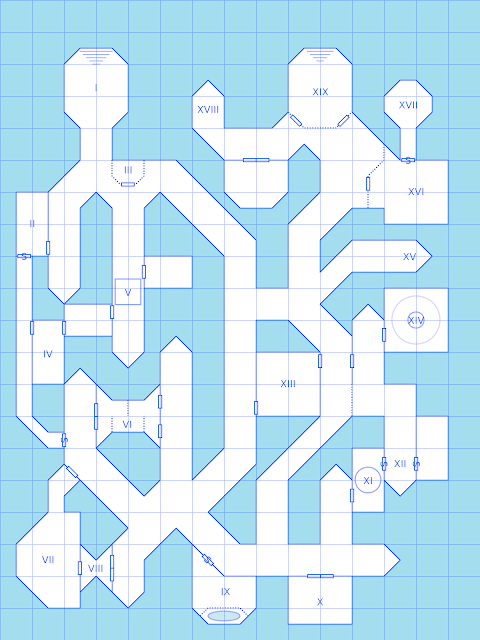 Add me on MeWe!
Leave me a voice message!
Drop me an email!
Or find me on Discord: ClericsWearRingmail#5545