Choking ash refused to settle - perpetually buoyed by vents and super-heated currents born of fissures, variable in their size, cracking the plain: themselves born of a vicious undercurrent of flame and rock. Lava flows that had followed a belching, petrifying cloud - making casts of men and freezing them forever into their final horrid moments - were cooling: black shells over red rivers, daring a fool's foot to mistake them for a road. 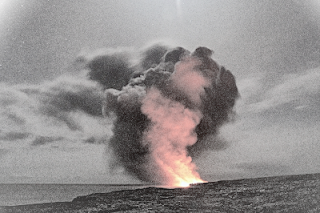 The group of men tread carefully, the soles of their sandals smouldering despite careful avoidance of looser clay - where the ashen soil had not yet hardened into concrete. Six of them came - some with their ceremonial spears, one with the grand headdress and and the barley offering - but all holding their courage. None knew if the Plains Lord still slept - or where it might have been: if it had been found in the periphery or in the path when the cataclysm had come.

They approached the old totem cautiously - a silhouette, broken and leaning: black against the gray. Then, beneath it, a heap - a berm - sparks and embers: a campfire left to dwindle...

...and then motion. The Plains Lord! It yet survived! And yet...

The doppelganger leaps up. Strings of smoke follow its limbs, cracking and creaking, torturous and irregular - but swift! Listing to one side it bites; falling over itself, it swipes: a deafening sound and a thousand burrs bite into the skin.

The beast beats its wings - air filters through a dozen holes and cracks in the connecting membranes - two beats, three, a fourth on the right to match the time with a slower left... and away. 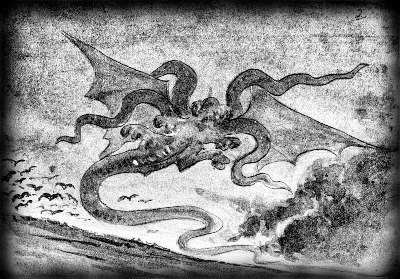 Lords of the Ash Waste

Waste Dragons are the tormented cousins of the Grass Dragon: their scales having gone hard, coated in salt, and their tendrils having largely gone heavy and limp - some emitting smoke from ever-smoldering veins.

The Waste Dragon is not territorial - and only partially intelligent - driven mad by the changes in their biology resulting from the corruption of their sustaining energies. They speak little or none - apart from the eldritch incantations, memorized by rote rather than intention, associated with the magic at their control. They roam the badlands and burned places in a mix of loping walk and awkward flight, engaging whatever they see according to the whim of the moment.

Waste Dragons are difficult to see coming in fogs, mists, or dust storms. Thus, a Waste Dragon which is encountered outside its lair has a 3-in-6 chance to surprise. If the dragon is asleep, there is a 5-in-6 chance that the party will not notice it at all: thinking it a mirage.

The breath weapon of a Waste Dragon is a cloud, 40’ by 40’ by 20’. A vortex erupts, filled with brick-a-brack of dead foliage: kernels, grains, rocks, and stems. Any character affected by the breath attack must, after 1d6 hours, Save vs Poison. On failure, they feel sickened, taking a -1 penalty on all rolls for 1d4 days. At the end of this period, they must save again – and so on, indefinitely, until they save successfully: at which point the effect ends.

Remove Curse, Remove Disease, or other similar magic can end the effect prematurely. 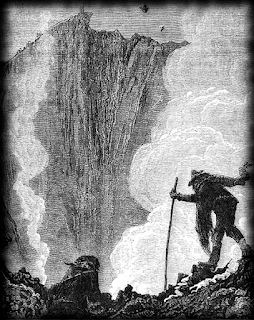 Waste Dragons build their lairs in craters, under lahars - hardened to concrete, or in crevices and breaks in the earth. They have an affinity for the soil: to which they feel a primal connection - unconsciously seeking rebirth, renourishment for the living plains surrendered to desolation.

Waste Dragons will hide or destroy treasure that they find in these underground places - concealing it or defacing it - in order to create separation of the artificial (cut gemstones, jewelry, specie, and the like) and the natural: again, a failing hope hidden beneath layers of impetus to cause equilibrium to return. The impact of potential vandalism to the value of treasure, or to its accessibility, is at the behest of the referee, complimenting the environment in which the hoard is encountered.

Waste Dragons are immune to Poison and resist Cold and Ice - taking half effect therefrom.

Waste Dragons cannot be subdued - their crazed demeanor prevents it: the cognition required for cowardice eluding their tortured psyche.

Spoiler Alert!
The Deeper Lore section contains some notes to help a GM (me) to run Waste Dragons in a way consistent with the archetype they are supposed to fill and some of the inspirations behind their creation. If you play in (or want to play in!) a game GM'ed by me, beyond this point will ruin some of the mystery for you for both Waste Dragons and for most of the sentient races: having some impact in the game world that isn't immediately available outside of player character discoveries.

Waste Dragons are the grizzled survivors of a total collapse of the grassland ecosystem, but sustained - reborn, almost, a dragon's equivalence to undeath - by the echos of that destruction. Grass Dragons have a kindredship to them - they recognize this corruption - and they have been known to react strongly: trying to excise the ash - and in failing, to execute for the sake of mercy. Such events as volcanic eruptions, meteor strikes, or dramatic change in the local climate resulting in the rapid desertification of a formerly lush space can cause a Grass Dragon to become one of the Waste - a fate that is more likely to befall one sleeping through the event than one waking: as flight is preferable over remaining.

As such, there are no young Waste Dragons - only old, grizzled veterans: strong enough to survive the change. Eggs subjected to the same conditions will often turn to granite spheres: prized by warlocks for their esoteric properties. Likewise - Waste Dragons have a limited life span: as the echos that sustain them, over time, will grow weaker and weaker. Sometimes - if the ground can be healed - the dragon might heal with it, its scales growing more supple, its tendrils sprouting and growing again: but the mind of the dragon can take much longer to recover than its body - and some have been said to go catatonic for years: some never again waking up, but not succumbing to death: instead becoming one with the earth and the healing steppe. 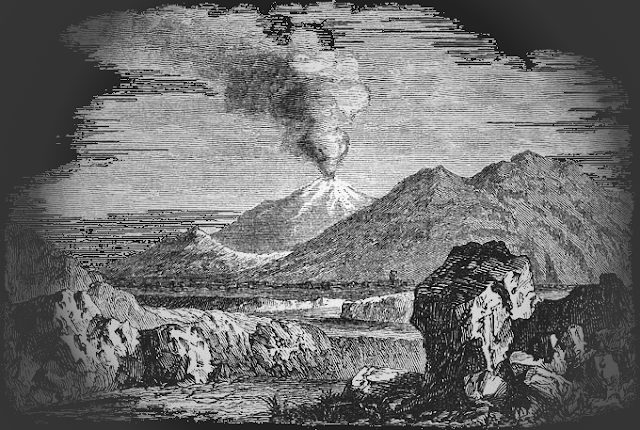 Public domain art retrieved from the National Gallery of Art and OldBookIllustrations.com and adapted for thematic use. Attribution in alt text.

Email ThisBlogThis!Share to TwitterShare to FacebookShare to Pinterest
Labels: beastiary

About the Misted Dome

Add me on MeWe!
Leave me a voice message!
Drop me an email!
Follow me on Twitter!
Hit up my YouTube!
Ugh... or Facebook...
Or hang out with me on the Audio Dungeon Discord! (ClericsWearRingmail#5545)