Crypt Beneath a Lost Chapel

Originally mapped as the basement under Roost in the Forgotten Church but removed as I wasn't sure how much value it was adding - I went ahead and stocked it and put it up today as a supplement. Looks good to you? Slap it in!

Suitable for 3rd to 4th level.

A stairwell enters the room from above - and appears to continue further downwards. The room is claustrophobic - characters moving around the stairs to either end will need to do so in single file.

The stair is trapped. If a character continues downwards, the stairs collapse, dumping anyone on the stairs at or below the ground level into a pool of acid. Any character so dumped suffers 1d6 damage up front, and then a further 1d3 damage each round for 1d4 rounds.

A savvy character with a mirror may note, following the spiral of the stairs, that they terminate unceremoniously just out of sight - having led nowhere.

A casket - stone - is open in the center of the room. It is empty. Flanking the casket to the north and south, against the walls, are 7 Zombies (B44) - motionless.

Cold stone walls to the north and east are lined by sets of manacles. Three skeletons - some with taunt, dry skin still hanging - are locked into some of the sets. These corpses are still possessed by their own spirits - while unable to move or feel, they are able to talk - spending most of their time jesting with one another at interval, and may do so with the party on a neutral or good reaction. They will not be aware of much of the dungeon - having been brought as prisoners - but should know more about any preceding levels (or the world around) as of 10 to 15 years prior.

Two coffins, side by side, lie closed. Against the west wall, a wrought iron altar - akin to an end table in its scale - holds a clay dish - above which, a shield hangs on the wall. The shield is magical, +1.

Two Pit Vipers (B42) are visible on the northern portion of the room; a further four are nested in the north coffin. Also inside the coffins are dusty skeletons - both wear heirloom rings, 50 gp value each; the north corpse holds a purse with 50 platinum pieces in it; the south corpse wears a plated necklace worth 500 gp.

A red and yellow rug sits before a lectern, on which are a skull, a quill pen, and a candle holder. On the lectern is written a short poem: 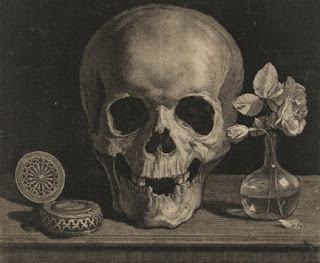 From the depths beneath the sea,
came all we've known and prize.
And to those depths, it will return:
as nets, its reach, may rise.

When read, the trap in room 1 will audibly go off and not reset: a caustic mist slowly rising from the opening. This mist will rise, slowly, as follows:

Reading the poem backwards will reset the trap - and the mist will dissipate in half the time taken between its having been triggered and the point at which it was read.

While exposed to shallow mist, a character's feet tingle - and any organic worn items at or below the waist must Save every 6 turns or be damaged or destroyed, according to the judgment of the referee.

While exposed to mist inundation, all eligible items carried must Save on the same interval - also, all characters automatically suffer a -1 penalty to their chance to be surprised, and all Thieves suffer a -10% penalty on all Thief Skill attempts.

The skull wears a thin obsidian crown, tipped with opals. It is worth 600 gold pieces. Inside a hidden compartment within the lectern can be found a wooden box with 1,000 silver pieces in it.

A stone casket has been opened in this space. Dried blood is slowly browning across the floor, leading from the door, and a pile of dusty bones is unceremoniously dumped in the south corner. Four Ghouls (B44) are bickering in the chamber. Between them and the mess in the casket, 2,000 electrum pieces can be recovered.

Against the east wall, a glass case houses - upright - a Wand of Magic Detection. About the  base of the case are 1300 gold pieces in a pile. However, the floor before the treasure trove is illusionary - a 10 foot span, starting 5 feet from the door and leaving 5 feet for the case - conceals a 20 foot drop onto spikes coated with a noxious (albeit decaying) substance. The fall deals 4d6 damage - any character surviving must, one week hence, Save vs Death or come down with a fever - lingering for 2d4 days before succumbing to infection. 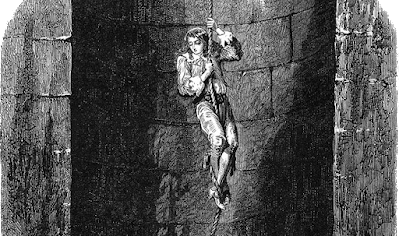 The room is ringed by red tile, forming a concentric square. Diving the interior of this space are four Celtic knots - all, red tile inlaid on the floor. A charred corpse bearing a bow and a quiver containing 6 magical Arrows (+1), lies face down near the door.

The door is trapped. If a character attempts to force it open, gouts of flame spurt from hidden nozzles in the corners: all characters within 15 feet of the door must Save vs Breath or take 3d6 damage.

A party consisting of five adventurers - two elves, two humans, and a halfling - lies slain here: piled up as if discarded. Their provisions have been stripped, though they retain some mundane gear, as well as a pouch with 6 oval-cut onyx (worth 200 gp each), two raw (and small) amethysts (20 gp each), and 2,000 silver pieces.

The center of the room bears five pedestals - five feet high, each - arranged in a pentangle: frustratingly out of sync with the octagonal walls. Perched atop each is a Gargoyle (B35). 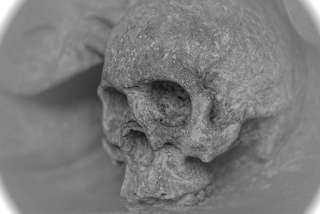 A stone skull hangs from the ceiling like a chandelier. About the floor are three chests - each locked - between them containing 7,000 silver and 1,200 gold pieces. In addition, a pair of platinum earrings (1,400 gp in value, total), an amulet with an embossed female figure on it (1,000 gp), and a bracelet - electrum plated - with emeralds on the links (1,700 gp value) adorn a mannequin.

The skull speaks to whomever enters the room - conversationally, as are the skeletons in room 3. However, unlike those corpses, the skull is maliciously mischievous, having grown bored in its watch over the treasure room: giving the party bad advice framed as good to appease its own alien sense of humor.

At this point in the otherwise nondescript hall, a Gelatinous Cube (B35) sits - taking up the whole of the floor-plan, up to the ceiling. It will start moving if either prodded or if adventurers come too close - alerting it to their presence.

Public domain or open license artwork retrieved from the National Gallery of Art, OldBookIllustrations.com, or Pixabay and adapted for thematic use. Attributions in alt text.

Email ThisBlogThis!Share to TwitterShare to FacebookShare to Pinterest
Labels: maps and adventures

Experiencing Chainmail (an an #OctOSR Announcement)

Experiencing Chainmail (and an #OctOSR Announcement) Anchor.fm/Clerics-Wear-Ringmail (Or on YouTube! ) Description E...