The bones! Look at the bones!

Legend of the Bones is a solo-play actual-play audio podcast distributed, it would appear, by Podbean and made available on a plethora of platforms. Our host, Simon Williams, takes us through the struggles of a classic B/X party - exploring adventure sites, overcoming obstacles and adversaries, and traversing the world's wider map.

First and foremost - listening even to the introduction of one episode - you'll note the quality of the audio production. Music is infused seamlessly, mixed at a volume so as to compliment rather than distract from the narration and sound effects, and the vocals are crisp and intelligible. The author indicates his objective is to provide a modicum of quality that might pale to compare to that of Tale of the Manticore - another audio solo-play production and one that I've advertised on my own, extremely poorly mixed, podcast - and to that end, I feel the paling has instead tanned into a rich olive. Legend of the Bones is, without doubt, done by an individual with equipment and expertise, one who is investing himself into the production quality, and it shows. Listening through the "session 0" episode, the first of the series, I was taken aback at how good it sounded. Hats off, in that regard. 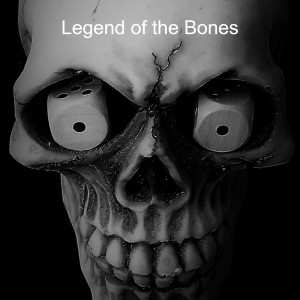 Secondly - something Simon stresses at the beginning of each episode - I appreciate the power of the dice in the game. The purpose of dice in any game - fantasy adventure or otherwise - is to introduce an element of chance: to produce a narrative that wouldn't otherwise have arisen as a result of randomization, of injection of failures or avenues that would not have occurred to a storyteller in a non-gaming environment. He does not pull punches - though I would argue, at one point or two, an NPC takes an action that vaguely favors the PCs (but, in that it's a solo play, are all characters player characters? For another time!) - and he allows encounters and an oracle to determine essential questions as they arise. In particular, I noted this in character generation: when he rolled abilities, the character with the high results in prime requisites were assigned classes according to those prime requisites. This is illustrative of a cognitive divide between old and new schools - stressing the original purpose of the ability scores: ability scores determine and reinforce an archetype, but are not the driving factor behind the character in OSR style games. Comparatively, in new school gaming, abilities are infused into every aspect of play: making them far more essential. Because of this divide - new school characters require good stats in order to be most effective: old school characters become more effective as they level - while good stats give them some initial survivability and may help with the leveling process, class and level are primary determinants of success.

But that's a rant for another day.

This podcast illustrates - in combat, in exploration, in character generation, and everywhere - the importance and effectiveness of dice: that infusion of entropy that turns a role playing fantasy adventure gaming experience into a story worth telling.

Of further note - I appreciate the lack of balance. Challenges are what they are regardless of the party approaching them. The enemies that spawn do not scale with the party: instead present a verisimilitude in their organization and appearance as to reinforce the environment and milieu. This is something I try to do in my own home campaigns - and is something that can occur in dungeons, as well. Reviewing the wandering monster tables provided for dungeoneering - say, in the Moldvay Basic book, on which the podcast is based - while the majority of the monsters are of hit dice appropriate to the level, a great deal of them are not. You may run into something you can, as a group, dispatch easily - alternatively, there are certain encounters that can occur, rules as written, from which a party with half a brain in their heads should flee. This is an important difference - again - for a new school player to learn going into an old school game: one which I appreciate being highlighted (and demonstrated) in the Legend of the Bones actual play.

Lastly - the reason I felt I needed to review this as early in its cycle as it is - the educational value for B/X | OSE as a system is phenomenal. The host plays by the book, by and large, and tells you what he's doing as he does it - for example, as the party moves across the over-map, he specifies that - depending on terrain type - there is a chance to get lost: and when he rolls that they do, he follows through with the procedure and the party loses that day, having gotten themselves turned around. 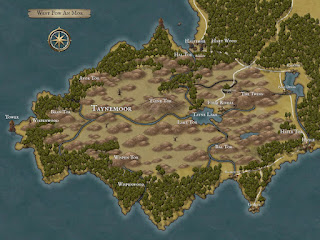 There - that's an even extra bonus points educational moment - he illustrates hex crawling! On an audio podcast, no less!

There are house rules in the game - and there are some rules interpretations I disagree with (Simon relies on, for example, the optional roll against ability, Charisma, where I would use a reaction role): but those disagreements are minor and moreover, he specifies - typically on each event, but at least once the first time - where a house rule is applied, how it works, how the RAW rule works by comparison, and (in most cases) provides a link to the Legend of the Bones blog where the house rule, the custom spell, or otherwise deviating procedure can be found, reviewed, and - if you like it - applied to your own game. I respect that - as a consumer of houserules myself - and it provides perspective for a new-to-OSR listener.

Things to Keep in Mind

Tried to hide that behind a details panel - but last time I did that, Blogger decided it needed to be open by default... which is weird. Good luck, reader.

Relating to the above - of note - the host does not use the traditional XP for GP loop. The purpose of that loop - which he grazes, but I don't know if it rings the bell - is to reinforce a particular style of play. By focusing on treasure, the game will proceed as a treasure hunting game: prompting creative solutions and courageous explorations in attempt to reach the dangerous, far-away places where that treasure - and thus reward structure - can be found. In Legend of the Bones, the host uses an alternative system of advancement that is based more around "sessions survived" - with a number of episodes being necessary for each character to level. This fits his format - as he doesn't have a big focus on treasure, instead trying to produce a narrative and an intriguing story. However, it's not something that you'll necessarily see in an OSR game and - if you, the aspiring referee - are tempted to change it: be advised as to its original purpose and be aware that, as you change the source of advancement, so also it will change the tone. If you give more XP for fighting - then the players are going to fight more and the campaign will focus on fighting; if you give more XP for     Social Media
Sound interesting so far?

Follow the podcast (@LegendBones) or the podcast's creator (@simonjhwilliams) on Twitter!
role play - then the players are going to role play and you may find yourself running a town sim rather than a dungeon delver, as the hazards are still there, but the reward is not.

Last thing to note - Simon invests a fair bit in backstory. Each character has a vignette that introduces how they came to the world, how they came to the campaign, and ties them to potential plot hooks later down the line. This is well and good - there's nothing wrong with a brief backstory - but there are also "flashback" instances later where the history of characters are expounded upon. This might be an opportunity for "emergent backstory" - where a character's history is increased and defined more and more as they advance - but I haven't seen evidence of it yet: and that isn't a concept that's really defined, indoctrinated into the OSR experience. I suspect he's doing it to lend depth to the characters - which, again, would be a decision directed at improving the quality of the story in a production intended to tell a good story - but it'll be interesting to see how it handles later on, in the event that the bones decide one of the invested characters are at the end of their rope.

Who knows - the depth may make it all the sweeter, as neither we - the listeners - nor Simon - the host - know who is doomed among them!

The solo play actual play Legend of the Bones podcast is a gem of a find. It is interesting to listen to, convenient in episode length (roughly one CWR commute each), and mixes mechanics with roleplay in such a way that neither takes control and drowns out the other. It's a great resource for learning how to play, as well, and showcases all of the aspects of the game essential to an OSR play-style: something few actual plays are able to do. For that reason, I rate Legend of the Bones as Plate.

Well done, Simon - and though, as of this writing, you've only got seven episodes, I look forward to however many more you put out between now and the end of the story your bones aim to tell.

Thank you for reading!

Legend of the Bones show logo and Taynemoor regional map are property of Legend of the Bones, retrieved from https://legendofthebones.blogspot.com/ and included (with permission) for the purpose of review under US Code Title 17 Section 107.

Crypt Beneath a Lost Chapel